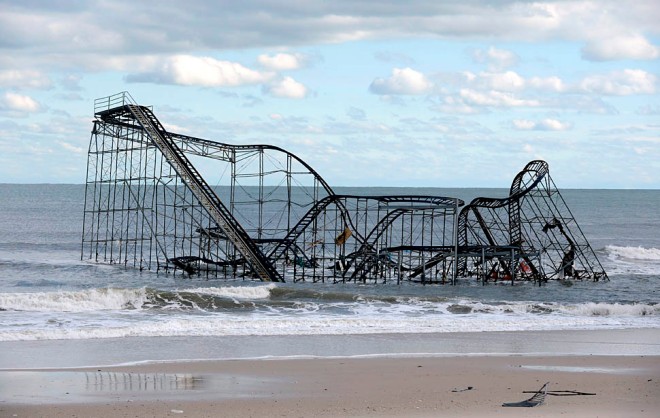 First things first: There’s nothing good about hurricanes.  Whether Sandy, Katrina, Andrew, or ones yet to be formed and named, they kill people, tear apart families, destroy homes, businesses, futures, and hope.  That said, some of the finest examples of human kindness and compassion are often tragedy’s most lasting memories.  First Responders and nameless neighbors risking their own lives at the height of the storm to save people they’ve never met and may never know.  Physically unaffected people from every state in the country and from countries around the world donating their time, resources and money to help crippled communities get back on their feet.  It’s in that spirit that a small craft brewery which recently moved from Cherry Hill, NJ (just a couple miles from my blogging global corporate campus and research facilities) to Somerdale, NJ lent a hand by brewing a special beer with profits donated to Hurricane Sandy relief efforts.

So THAT’s what “FU” stood for all these years…

Just about everyone in NJ and all along the Northeastern Coast has more than one memory of Hurricane Sandy.  Those of us who live in the area remember all too well where we were when it struck land and forever changed the geography of much of New Jersey’s shoreline.  I was lucky – sort of.  I missed all the excitement because while Sandy was wreaking havoc I was tethered to a hospital bed at the University of Pennsylvania in Philadelphia, 12 floors up with so many IVs in me that they must have thought I was an octopus.  Too add insult to professionally planned and executed injury (a.k.a. major open abdominal surgery), none of those IVs delivered craft beer (but one offered up something a little more potent).  Anyway, Sandy hit about 24 hours after I was told I might not survive the night and less than 24 hours after middle of the night trips through deserted corridors into the bowels of the hospital for emergency diagnostic studies.  As I said – I was lucky.  The rest of you aren’t.  I’m still here to pester you with these posts.

While recuperating at home and rebuilding my strength with a diet of matzo ball soup and Han Dynasty Dan Dan Noodles I saw a tweet from my home town craft brewers announcing that they were going to brew a very limited beer with all profits going to Sandy relief efforts.  One reason why the release was going to be very limited was simply the fact that they couldn’t bottle this beer.  It was going to be distributed in kegs only because there was no way they’d get approval for labels.  No F’n way.  Not for a beer called FU Sandy Ale.  “Forever Unloved”, yeah, right.

Flying Fish Brewery did a great thing by donating all of the profits from every keg of FU Sandy to relief efforts but they did something else which has gone largely unnoticed:  They brewed a spectacular beer.  I’ll admit it.  I’m often a critic of local brews, strongly favoring the bolder, brighter beers of the California Coast, especially San Diego’s flagship West Coast IPAs.  As I wrote a few months back in my post on the Converging Coasts of Craft Beer, I checked out many years ago but never left.  When it comes to a bias for West Coast craft beer, I’m guilty as charged.  That said, Flying Fish flat out nailed it with FU Sandy.

I missed this beer when it was initially released, chasing Twitter feed sightings from bar to bar in the Cherry Hill area the day it was tapped.  No luck.  Not until this past Sunday night’s Fathers Day outing to South Jersey’s finest craft beer bar, the Pourhouse.  My buddy and last H.O.P.P.E.R. standing and I were long overdue for what used to be a semi-regular Sunday night research session (work week readjustment therapy session is more like it).  After some well-deserved abuse for having become near strangers for our recent lack of patronage, Marci, their rock startender, said “we have the last keg of FU Sandy on.”  That was all I needed to hear.  No need to read the tap list.  My Fathers Day started with a breakfast in bed treat with the whole family (including the newest editions, Guinea Pygmalians I & II – my manes, not the kids’, they’ve changed names so many times that I honestly don’t know what they are) and it would end with an unexpected craft beer treat.  A Happy & Hoppy Fathers Day!

Flying Fish describes FU Sandy as a hybrid Pale Wheat Ale brewed with an experimental hop variety dubbed ADHA 483. The experiment worked.  Gloriously so.  Big, bright tropical aromas exploded from the glass.  Plenty of fresh mango, guava, and grapefruit.  Those flavors carried through to the flavor, balanced beautifully by the lightly toasted, biscuity notes from the wheat side of this blended style family.  Even though this isn’t an IPA it has all of the hallmarks of an exceptional one – a West Coast profile at that.  Silky mouthfeel and a crisp, moderately dry finish.  A legitimate contender for the best craft beer I’ve had so far this year along with Stone Enjoy By 12.21.12, Three Floyds Zombie Dust, and (512) Pecan Porter.  By far the best beer that’s ever come out of Flying Fish and one worthy of mention along with the best brewed anywhere.  A Heady Topper topper hands down!  Don’t get me wrong, these guys turn out a few other really nice brews including Exit 1, Exit 6, and Exit 16, but this one is in a class all it’s own – a world class.

So while Jersey may best be known for Springsteen, Bon Jovi, The Sopranos, and those horrific tomatoes, I nominate Flying Fish FU Sandy for a spot on the list of Jersey’s icons.  It’s that good and it did some good.