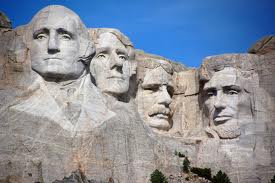 The Inspiration for Mt. Hopmore

President’s Day is a time for honoring all of our past Presidents but somehow the guys that managed to get themselves chiseled into that mountain seem to be the only ones that actually get honored.  Not sure what Martin Van Buren, Franklin Pierce, or Warren Harding did to miss the cut up there but perhaps there was a remarkable likeness of their faces molded into the mud beneath the pines after a storm one Thursday afternoon.  Or not.

In any event, images of Mt. Rushmore got me thinking about which craft beer pioneers I would want to see carved into a mountain.  Who belongs on craft beer’s Mt. Hopmore?  I started with a list of 7 or 8 names (ok, exactly 8).  Naturally, my target number was 4.  After all, the real thing has 4 and it looks really good under those fireworks at night.  Coming up with exactly 4 craft beer luminaries for Mt. Hopmore was; however, almost impossible.  Then it hit me – it’s my concept.  My mountain – my rules.  That was easy.  So my Mt. Hopmore has 5 giants of craft beer.  In all honesty, the first 3 seem to me absolute givens.  The last 2 were just too hard to differentiate between one another.  Both clearly worthy and both identical in one important respect.  Anyway, here they are:

First of all, doesn’t this guy look the part? Swap him out today for Teddy Roosevelt and almost nobody would notice the difference.  Hard to argue against including the guy who took over a failing second-rate brewery and turned it into, arguably, the flagship craft brewery that lead the way for all the others to follow.  A true craft beer icon.

It’s often said that Sierra Nevada Pale Ale was the one – the Neo of craft beer.  OK, I just said it and I’ll repeat it a bunch of times (though not here – there’s a limit to how much I really want to torture you) so it’ll eventually be often said.  Ken Grossman opened minds and palates to hoppy, flavorful ales and even though Sierra Nevada Pale pales in comparison to today’s hop bombs, many of them would never have been brewed if not for his vision and determination.

How can you ignore the guy who brought Samual Adams, an American patriot, to the masses by brewing it to them?  Too many good reasons to carve him into a mountain even if Boston Beer is, well, very large (and advertises – a rarity in the craft beer industry).  He’s been a huge supporter of small, independent craft brewers.

You knew he had to show up.  As outspoken as anyone in the industry today and a formidable foe to Big Beer.  The Godfather of extreme brewing, he’s come up some outrageous brews.  Love him or hate him, if you’re a craft beer fan you have a strong opinion one way or the other.  He’s elevated the debate surrounding beer vs. wine as a companion to fine food and he gets extra credit for pissing off Big Beer with his short-lived Brewmasters series.

Full disclose: I have a Stone Brewing addiction.  If my wife would have allowed it, our first child might have been named Arrogance.  That said, he founded Stone and the mountain is made of the stuff,  Aside from that, he’s turned craft brewing up to 11, pioneers sustainable industry and pokes a hoppy finger in the eye of Big Beer with every Ruination poured.  Oh, another thing: he’s made gargoyles very, very cool.

So that’s my Mt. Hopmore.  Agree? Disagree?  Take the poll and vote!