I’ve learned a great deal from my children – especially my daughters.  At 6 and 8 they are virtuosos at the finer art art of changing their minds.  At my age (which will be the subject of a separate post in the not too distant future) the simple inertia of decades of synaptic struggles doesn’t allow for lightning quick shifts in the direction of thought or decisions already made.  During those 4+ years when I wasn’t writing because I was being Natty Lightboarded I decided that I wasn’t going to write craft beer reviews if and when I started writing again.  My enabler and craft beer wingman G-Lo of Its Just The Booze Dancing kept urging me to post reviews – to copy some from my archives on RateBeer – but I’d made up my mind.  No beer reviews.  Not interested.  Plenty of great reviewers out there and some of them even know what wet horse blankets and freshly filed Indian Ocean cuttlebone taste like.  At least they say they do.  I don’t know.  I’ve always had a very hard time distinguishing between Indian Ocean and Bellighausen Sea cuttlebones.  That’s why I leave the serious reviews to the experts.  Then I read a review of Coronado Idiot IPA that left me wondering if it was written by the brew’s namesake.  One line in particular caught my attention: “…with serpentine and velvety layers of rich, dark fruits that ascend to vinousness.” Um, OK…. What the f*ck does that even mean!?

Suddenly the lessons of my daughters came to mind.  If they can change their minds at the drop of a Baby Alive curling iron, so can I.  So I’ll occasionally dabble in craft beer reviews (already posted a soft opening of sorts with reviews of Black Crown and New Albion Ale) but they won’t be quite as traditional as the ones you might find elsewhere.  I have to keep myself entertained after all. 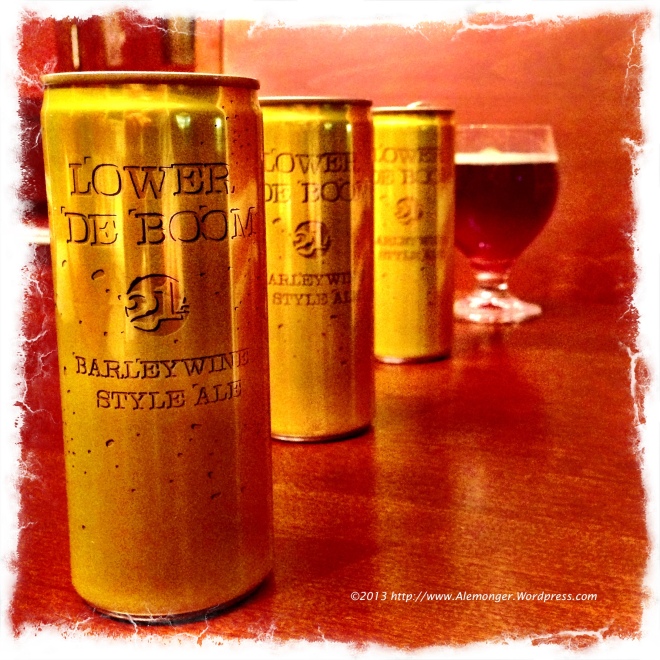 No mirrors were harmed in the staging of this picture. Honest

So I’m meticulously negotiating the ample grocery aisles at Wegmans sourcing ingredients for my Schlomo Kameamea’s Kamikaze Sliders when I lost my way.  Somewhere between the miniature King’s Hawaiian rolls and the Golden Frozen Latkes I found myself in the craft beer section.  Still not sure how I got there.  Never did find any bruises.  My handlers apparently don’t leave marks.  In any event, next thing I know I’m inspecting a previously unseen and unusually small cube of cans from 21st Amendment Brewery.

Full disclosure: I’m not a huge barleywine fan.  I often find them just a bit too intense and burdened.  Screaming for attention like the drama queens of craft beer.  Stone’s Old Guardian and Sierra Nevada Bigfoot are exceptions.  Lower De Boom intrigued me for a couple of reasons.  21st Amendment claims this to be an intensely hoppy brew – unique for a barleywine.  In fact, they’re description is decidedly anti-barleywine:

Lower De Boom is a powerfully balanced American-Style barleywine packed with citrusy Pacific Northwest hops. Chestnut brown in the glass with notes of toffee malt, fruitcake, toast, piney hops and more than a hint of alcohol. Our liquid gold is the first American craft beer in a can offered in the traditional barleywine “nip” size. Perfect to enjoy sipped at the end of a long day. More than that and you might feel like the boom has been lowered on you.

The second thing that intrigued me was the size of the cans.  Not sure what they mean by traditional “nip” size cans.  They’re far from traditional.  Look like they belong in the Wawa cooler next to Starbucks Double Shot cans – though they’d deliver a decidedly different buzz.  I know – I know – get on with the review.  Fine,  Sort of.

Here are a few things Lower De Boom didn’t remind me of:

OK, so one of these things is not like the others but the list is still accurate.  Lower De Boom doesn’t taste like any barleywine I’ve had but looks like plenty of them once freed of the nifty little cylinders.  Clear walnut/chestnut brown with mild carbonation supporting a very thin dusky tan head which disappears as quickly as a Salman Rushdie impersonator rounding the corner towards a flash fatwa.  Bold citrusy, piney, grapefruit aromas along with caramel and a hint of white pepper.  Things get a little weird in he flavor – but not in a bad way.  Hops still there.  Chewy, resiny, piney hops take the first few swipes before getting steamrolled by a Mavericks-like breaker of rich, sweet  roasted barley.  Caramel, toffee, vanilla, bittersweet chocolate and some snack fruits (Turkish apricots or figs – take your pick – I couldn’t figure it out).  I thought the texture was a bit thin for a barleywine but that improved the overall drinkability.  Despite the 11.5% ABV I didn’t get a big, boozy punch of alcohol in the finish.  A hint of warming perhaps.  Otherwise the finish is smooth, satisfying, and far less sweet than expected.  No vinousness, vinousing, vinophilia, or Venus and Mars anywhere to be found (all due respect to Paul McCartney & Wings’ greatly underrated album).

Bottom line is that Lower De Boom is an interesting and well-crafted brew.  For me it’s more of an American Strong than a Barleywine but my name’s not on the svelt little can so 21st Amendment can call it whatever they like.  They’ve earned that and more.

Have you raised a Lower De Boom? If so chime in and let me know what you thought.